This week was a heck of a lot better than last week. I mean, obviously. I ran almost twice as much. It still had its ups and downs.

Tuesday I did my first night trail run. It hardly counts because it was at Bagley, but it was a start. I did a warmup of the non-hilly loop of Bagley, then went up the hill, back down the way I came, up again, and then down the other side. I looped around and repeated the same up-down-up-and-over exercise, and then cooled down with the non-hilly loop. My heart rate sucked on the hills. Whoops.

Wednesday I did actually run a little bit. However, my heart rate was way out of whack. It was spiking at what is normally a warm-up speed, and wouldn’t settle down. I gave up after like a mile and a half.

Thursday I was stupid and didn’t quite get how cold it was. My hands were unbelievably cold throughout most of the run, to the point where they were swollen and clumsy when I got back to the car. The rest of me felt fairly warm, so I’m not sure why my hands were so cold, but it was awful and I was glad I didn’t push to go farther. I need some better gloves.

Saturday and Sunday were above freezing! It was glorious. I know it’s going to get cold again, but I don’t mind quite as much when there are a few days of respite here and there. Sunday it was even sunny. On most winter days, if I see that it’s sunny, that means it’s bitterly cold. Sunny and warm is typically too much to ask.

I went to Jay Cooke State Park both days. I wanted to get out somewhere I don’t normally get to, rather than the same old trails around town. The first day, I headed across the swinging bridge and along the Silver Creek trail. The trail was only semi-packed, so it was slow going. Even the downhills were slow, since the snow was kind of soft and would give way without warning, so I never knew if my foot was going to sink in or not. 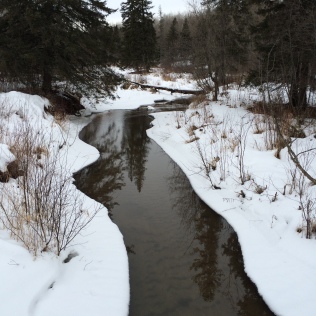 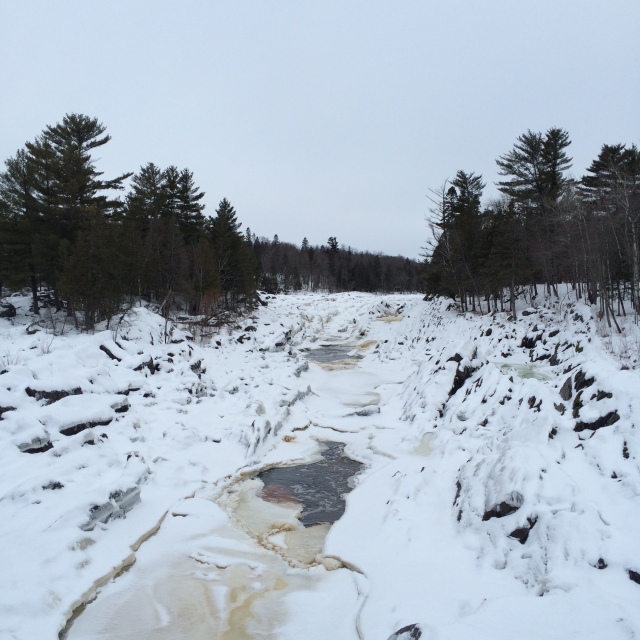 The Saint Louis River, as seen from the swinging bridge

Sunday I followed the Superior Hiking Trail the other way, along the Munger trail. It’s a snowmobile trail, so it was much flatter than the Silver Creek trail, and it was… kind of groomed, I guess. The snow was really soft, so I was expending a lot more energy than I normally would have on such flat terrain. That was kind of frustrating, since it was my “long run” day. I felt pretty good for most of the run, and didn’t see too many snowmobiles, so it wasn’t all bad. I do need to get some prescription sunglasses. I wasn’t doing Future Donna’s vision any favors.

Sunday’s run was my longest run since the Harder ‘n Hell Half, which surprised me when I just now looked it up in my training log. It also took me 2 1/2 hours. That was kind of depressing, but at the same time, it’s what I’ve gotta do in these kind of conditions, with this kind of training. Once it’s milder and the trails are clear of snow and the mud’s dried up, I’ll be moving along at a much better clip. I hope.