I returned to the Superior Hiking Trail yesterday, starting at the Magney-Snively parking lot and heading toward Ely’s Peak. 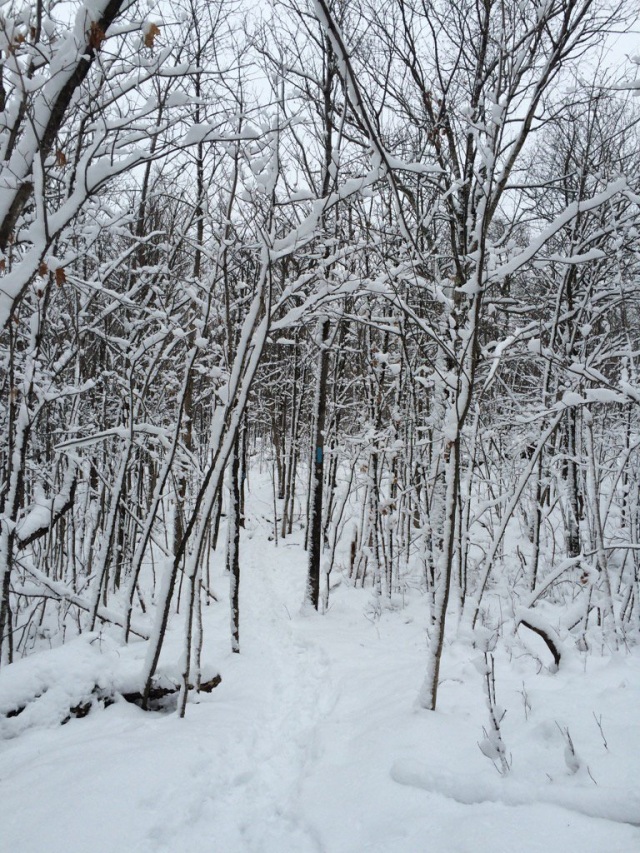 It was a bit magical, you might say. At least, the scenery was.

The run, on the other hand, was not very pleasant. I ran just over 5 miles and it took me a little over 2 hours. Yikes. I mean, I’m slow. But I’m not that slow. I was planning to go to Ely’s Peak and back, and that didn’t happen. I was chasing daylight by the end, and probably had about 15 minutes or so left before it started to get dark. I should have brought my headlamp, but didn’t. I did have my phone with me just in case I needed a flashlight.

I wasn’t breaking trails, but they weren’t nice tamped down trails either. I didn’t expect they would be, but I also didn’t expect it to be so physically taxing to run in snow like that. It’s still preferable to running in sand, but I felt pretty worn out.

I wore my shoe chains (which have corroded a bit on the surface, so we’ll see how long they last before they break), which helped me dig in. I felt a lot more confident bombing down hills with the added traction. I did slip once but I was trying to take too big of a step up and the snow gave way.

I might have to rethink some of my trail running plans for the winter. I mean, obviously running at Hartley or Bagley will be no problem, but going off the beaten path is going to take more effort than expected. I read somewhere (I would link the article if I remembered where) that running trails in the winter should be based on time rather than distance. So, if my training plan calls for 10 miles, I should run for the time it would take me to run 10 miles on dirt, and I’ll get the same benefit. Right now I’m not training for anything, but it’s something to keep in mind. I certainly felt like I ran more than 5 miles, which was unfortunate since I was tired for the 10:20 showing of The Force Awakens.

I ended the week with 27.7 miles, which is about where I want to be for a base. However, I also took two weeks off from running, so that’s not where I wanted to be for a base. I still have a few more weeks before I start my spring training cycle, so I’ll have at least a month’s base to start from. I’m enjoying this unstructured, relaxed running, but I also kind of miss training for a race. Let’s see what I think in mid-March when I’m panicking about whether or not I’m prepared for the race that’s only a few weeks away.