Everything but running, basically.

My top priorities for this vacation were to maximize my time spent with my family, and to make sure I got enough sleep so that I could be pleasant to them. Most of my family lives over a thousand miles from me, and with the exception of my grandparents (who until recently lived in Florida most of the year), everyone lives at least 100 miles away. When we do have time together, I want to spend it together, so I can’t exactly go off on a two hour run. I often don’t sleep well when traveling, and we moved around quite a bit, so there were a few days when I planned on running and then opted out of it because I had slept poorly.

My husband and I decided to drive, since I’m not a huge fan of flying, I prefer the flexibility of car travel, and we wanted to see sights along the way. We spent the first day (Wednesday the 6th) driving from Duluth to Buffalo. Chance of running: zero.

On Thursday (before we even went to bed), I realized we were going to have to have a relatively early morning. Our plans were to see my friend in Buffalo, go to Niagara Falls, and then drive the final 9 hours to Maine. This meant getting up at about 8:30 a.m. eastern time, which was 7 a.m. normal time. I don’t even get up that early for work, and certainly not when I roll into a hotel at like 1 a.m. Chance of running: zero. I did plenty of walking around Niagara Falls (American side only), so I got in some exercise before we drove for 9 hours, much of it in the dark and in the rain. 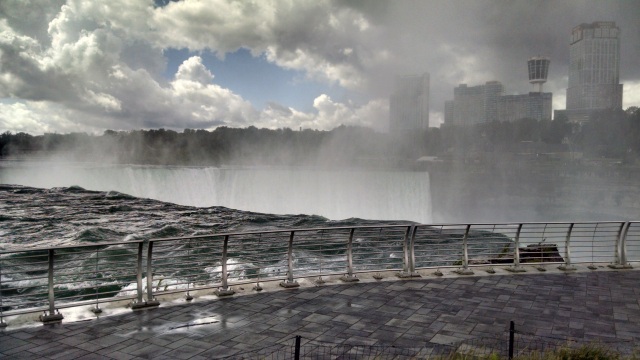 Niagara Falls. I wish we’d planned enough time to take the Cave of the Winds tour!

Friday I managed to get up early enough to run for about half an hour on the treadmill. It wasn’t pleasant, but I was happy to get a few miles in. Thus, chance of running: 100%. After that, we drove to Freeport, home of LL Bean. It turned out to be a big outlet mall, which isn’t really my scene. I avoided going in the Bike, Boat, and Ski store, so as not to try to buy everything in there. The flagship store is open 24 hours a day, and I was tempted to go there in the middle of the night, just because. Friday evening, we attended the rehearsal dinner for my cousin’s wedding. It was at the Small Point Club, which is a private beach club out on a peninsula on the coast of Maine, and I am pretty much ready to join the club right now. 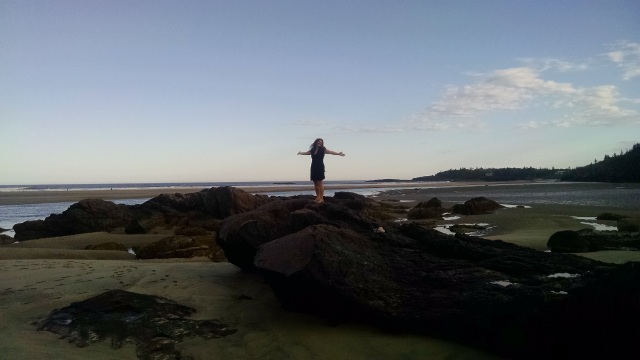 A human being that was given to fly. 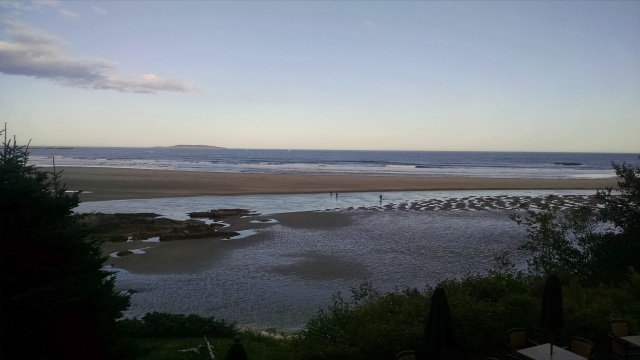 The view from the deck of the club house.

Saturday we had to leave the hotel as we were staying at the wedding venue that night. I could have run, and set an alarm to get up in time to run, but then… didn’t. So, chance of running: 33%. We had some time between check out and check in, so we went for a short walk in the woods at Thorne Head Nature Preserve in Bath. I was checking in on the Superior Trail Races periodically, since I’d originally planned to run the marathon before learning the wedding date. I had some FOMO, definitely, but there was no way I was missing this event for a race I can run any year. Also, it was really muddy this year, so I’m not super sad I missed out. 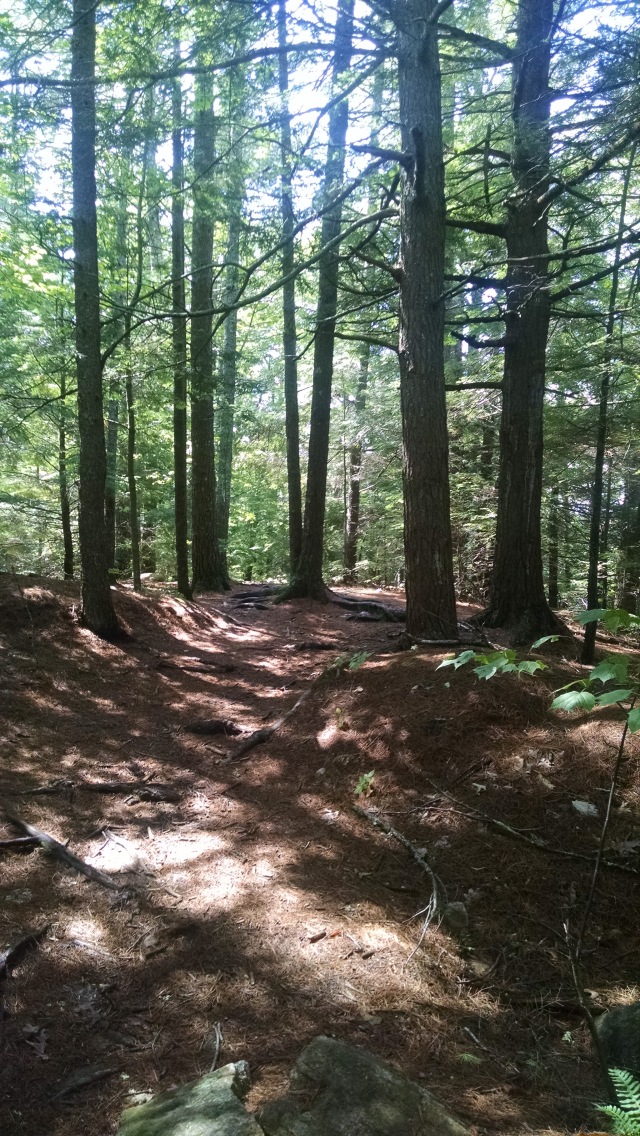 I did manage to find some rooty, rocky trails for solidarity.

The wedding venue was on the Kennebec River, and was absolutely gorgeous. It was a perfect day, a fun wedding, and I got plenty of exercise on the dance floor with my crazy, weird, wonderful family. 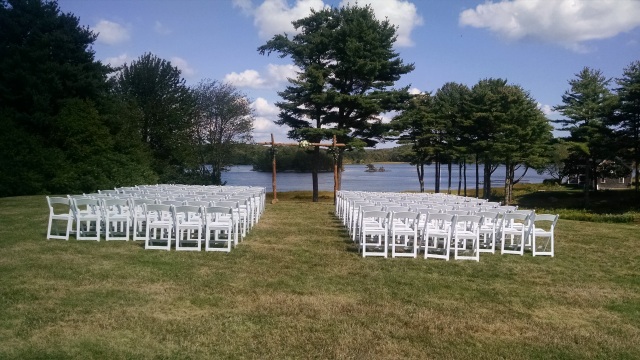 No decorations needed, beyond the arbor my uncle made.

Sunday as soon as I got up, I started helping load out the inn. My cousin had brought in a lot of things, which we had to bring back to the camp, or she had to bring back to Boston, or needed to be returned to someone else in the wedding party. So I got a lot of exercise in that way. We drove back to Commoosie Camp, my aunt and uncle’s lake place near the New Hampshire border, and got in some water-skiing, jet-skiing, and sauna sessions. The camp (or cabin, or cottage) has a stand alone sauna unit, and my aunt and cousins and I did two sauna sessions followed by two skinny dips in the lake. It was so relaxing and refreshing! 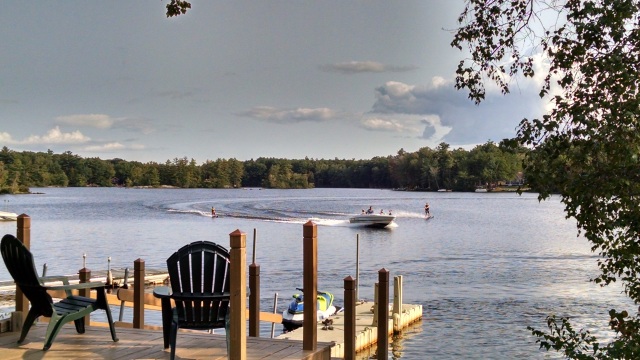 Monday we had absolutely nothing to do. I could have, and should have, gone for at least a short run, but I didn’t. I’ll call that chances of running: 75%, as I had several opportunities to do so. After caffeinating, my husband and I decided to drive in to nearby Kennebunkport. We didn’t see any Bushes, but we did see the ocean, and it was lovely. 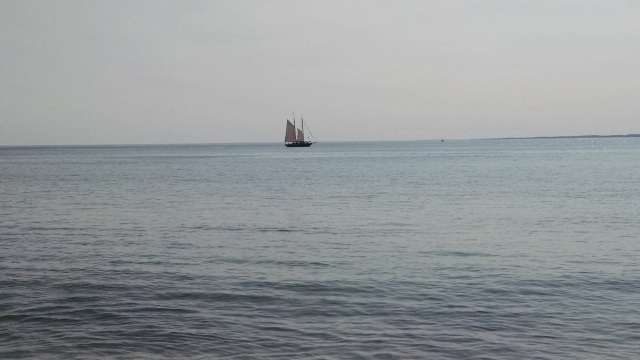 We spent some time walking around, so again, I got in some exercise. And I water-skied again, even though my arms felt like they were being pulled out of their sockets. We had a lobster boil and then another sauna session.

Tuesday we had to leave, which I absolutely did not want to do. I could have stayed at the camp forever, relaxing, swimming, boating, and enjoying time with my family. Of course, everyone else was leaving (or had already left), so the spell would have been broken. Chances of running: zero, although I felt pretty lame when I went outside to pack the car and saw the newlyweds doing a Crossfit W.O.D. in the driveway. Now that is dedication.

How could anyone want to leave this?

Wednesday we woke up in Cleveland and went to Progressive Field to check another stadium off our list. We walked around the ballpark quite a bit, taking pictures and checking out all the features and exhibits. We saw most of Cleveland’s 21st win in a row (the historic streak stopped at 22) before ducking out a bit early to get on the road to Detroit. It was only a few hours from Cleveland to Detroit, so we had plenty of time to get dinner at a delicious Lebanese restaurant and then I ran 3.75 miles on the treadmill. Chances of running: 100%!

Thursday, we went to Comerica Park for another baseball game, and again spent quite awhile walking around checking out their exhibits. I had set my alarm to try to run on the treadmill before going to the game, but I didn’t sleep well the night before and knew we had a long day ahead of us, so I went back to bed. Chances of running: 50%. It was really hot at the ballpark, so we left after only a few innings, and drove back to Duluth over the Mackinac Bridge and through the UP, which was lovely and scenic, and a nice change of pace from the southern route through Ohio, Indiana, and Illinois. Also we saved a lot of money on tolls on the way back!

Running will always be there, but the once in a lifetime experiences with family won’t. I put on a pound or two during vacation, but I also let my blisters fully heal, the chafing on my back from my sports bra went away, and I let my mind and my body rest. Now I’ve got two more weeks before the Birkie and five more weeks before Wild Duluth to train with a clear mind and rejuvenated body. 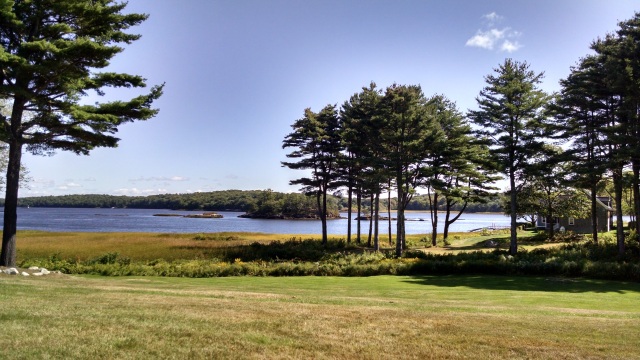 One thought on “What I Did On My Summer Vacation”